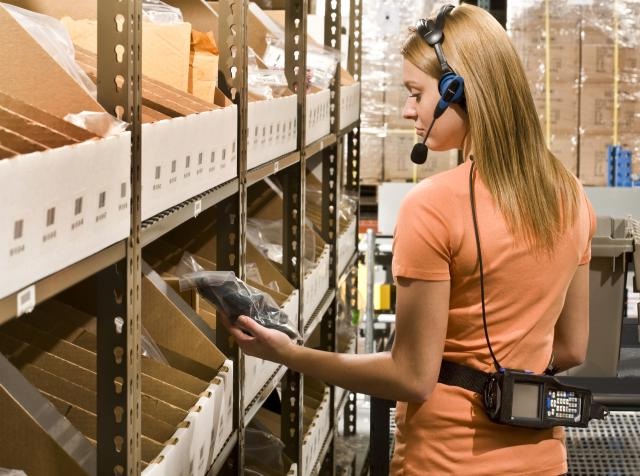 Although the use of voice direction and speech recognition software in warehouses was first introduced in the late 1990s, recent advancements in voice recognition technology have led many experts to expect an increase in the use of these technologies within the next few years. Since the ‘90s, computerised voice recognition has improved dramatically, opening up new possibilities for voice-directed software systems to be used in warehouses. Some warehousing voice software is even equipped so that it can be “trained” to recognise an individual employee’s particular speech patterns.

What Are The Advantages of Voice-Directed Warehousing?

Voice-directed warehousing allows employees to communicate verbally with computerised systems, rather than relying on other interfaces. Wearing headsets and exchanging spoken words with the computer is easy and intuitive, and allows employees’ hands and eyes to remain free for other tasks. Some of the advantages of voice recognition software for warehousing include:

Voice-directed warehousing can serve to optimise operational efficiency in warehousing and distribution centers, lowering costs and producing a worthwhile return on investment.

The software used in voice-directed warehousing can be either “speaker-dependent” or “speaker-independent.” Speaker-dependent voice recognition software can become “trained” by employees to respond to that individual’s particular vocal timbre, cadence, and speech patterns. One of the biggest issues in voice recognition technology has always been the variability of human speech. No two people speak in the exact same way, and even the same individual can vary in how they pronounce a word. Although human brains are specially adapted to deal with this inconsistency, getting computers to do the same has always been a challenge.

Fortunately, great strides forward in voice recognition have led to speaker-dependent software that can “learn,” often in as little as twenty minutes, to recognise and adapt to an individual’s unique way of speaking. The advantage of speaker-dependent software for voice-directed warehousing is that it cuts back drastically on costly picking or shipping errors. If the software misinterpreted a word, it could completely change the instructions the employee was trying to relay to the computer, and in a worst-case scenario lead to a monetary loss. The flexibility of speaker-dependent software greatly reduces the chances of this happening, potentially saving significant money in the long run.

So Is Voice-Directed Warehousing Worth It?

Voice-directed warehousing provides an opportunity for increased efficiency and cost reduction. Employees require little training to use the software, which can often adapt to individual speech patterns, and the use of headsets reduces safety risks by freeing up employees’ eyes and hands. Some companies have reported massive increases in efficiency, as high as 90%, due to implementing voice recognition systems in warehouses and distribution centers. All in all, the return on investment can definitely be worthwhile for voice recognition software in warehouse computer systems.